It’s that time of year where most people participate in holiday cheer.  It’s means spending time with your loved ones and receiving gifts, but in the Centralina region it’s a time of giving.

This year all 8 of the NCWorks Career Centers(Anson, Cabarrus, Iredell-Mooresville, Iredell-Statesville, Lincoln, Stanly, Rowan, and Union) in the Centralina region decided to do something differently.  Instead of spending time preparing to give and receive from their personal families, staff decided to give back to the communities in which they work and live in. 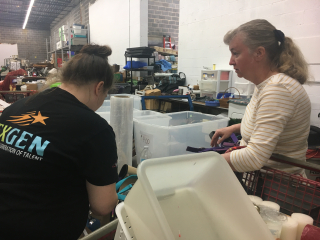 On Friday, November 18, 2016 the NCWorks Career Centers in each individual county, picked a location in their counties to volunteer and give back.  The day was entitled Centralina Cares—A day of Giving.  The Centers were tasked with helping places like the Mooresville Soup Kitchen, Habitat for Humanity’s Restore, Common Cupboard, the Iredell County Public Library, the Stonewall Jackson Training School, and the Anson County Animal Shelter.

“We appreciate the opportunity to give back to the local community,” said Donnie Mann, Center Leader for the NCWorks Career Center-Stanly.  “The work accomplished was very rewarding for staff, giving each of us a sense of pride in our local community,” he added.

The staff at the NCWorks Career Center-Stanly assisted Homes of Hope, Inc.  Homes of Hope is a transitional program that assists motivated people to move from homelessness to self-sufficiency.  Homes of Hope rents homes to qualified people who live in them for up to six months while they secure permanent housing.  The staff at the local career center assisted with two rental units for the Day of Giving.  Part of the staff performed outside duties such as raking leaves, picking up sticks and limbs and general yard work at one unit while the rest of the staff performed inside cleaning duties at another unit.

The staff at the NCWorks Career Center-Lincoln assisted Habitat for Humanity’s Restore since they’ve relocated to a new store which is larger than the old store.  Staff helped with stocking shelves, cleaning merchandise, fixing light fixers, putting prices on merchandise, and putting things together.  Later this same day the store held a ribbon cutting ceremony and the NCWorks Career Center-Lincoln staff were tasked with making sure the store was prepared for the event. 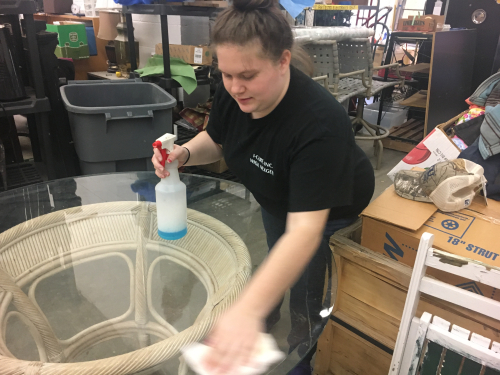 The staff at the NCWorks Career Center-Union assisted an agency called Common Cupboard in preparing Thanksgiving boxes that will be given out as a donation of unprepared food containing turkeys, can goods, produce, and beverages.  The bulk of the staff’s work consisted of separating 50 pound bags of white potatoes and boxes of sweet potatoes that were loaded on a truck trailer, counted out a certain amount of each, and placed them in smaller bags.

“This was hard work, however, we did it with a smile,” said Thomas Foster, Assistant Center Manager at the NCWorks Career Center-Union.

These are just a few of the locations that the NCWorks Career Centers in the Centralina region worked at during the Centralina Day of Giving Event.  The Centralina Workforce Development Board is pleased with the work done in each of the counties for the first annual event.

For more information about the NCWorks Career Centers in the Centralina region visit, www.centralinaworks.com.

The comments to this entry are closed.